THE NATIONAL GUILD OF ST. MARGARET OF SCOTLAND AWARD

The National Guild of St. Margaret of Scotland Award is given annually to a University of Chicago Medieval Studies student. The recipient is selected by the faculty and awarded to the student who has written the finest thesis in Medieval Studies. A monetary award and certificate is presented in May. 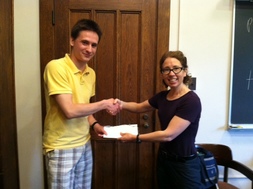 Mihow McKenny graduated from the University of Chicago in June 2015 with a Bachelor of Arts in History. Mihow has participated in a neighborhood schools program, tutoring K-5 students and assisting with the implementation of a K-8 reading curriculum. He's also worked in the campus library as a Student Circulation Services Assistant and has extensive research experience. Mihow is fluent in Polish and is skilled in both Spanish and Latin. His interests are European history, biking, the automobile industry and food.

Alexandra "Ali" Peters graduated Phi Beta Kappa from The University of Chicago in 2014 with a BA in History and in Medieval Studies. Ali has served as an Assistant to the Medieval Studies BA Program, a Marketing Intern, and Senior Editor of the University of Chicago Undergraduate History Journal. Among her talents are fluency in Spanish and varying degrees of competency in Portuguese, Arabic and Latin as well as advanced skills in computer technology.

Alice graduated in 2013 with a dual degree in English and history and will continue her studies in medieval law. She is a founding member and the senior editor of the Chicago Journal of History. In addition to reading French, Spanish, Italian and Latin, Alice enjoys music, ballroom dance and film.

He has attended the University of Chicago since 2008 – where he is has a double-major; Medieval Studies and History.
Following graduation from Chicago June 2012, he will be spending the 2012-2013 academic year in the Republic of Macedonia on a Fulbright research scholarship.